My Favorite Museums in Omaha Nebraska

Omaha is fortunate to have several interesting and renowned museums. I will talk about a few that I call my favorite museums in Omaha NE. 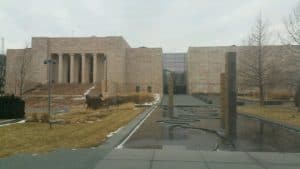 Joslyn Art Museum started as the Joslyn Memorial.  The Art Deco gem was built and donated to the city by Sarah Joslyn as a memorial to her late husband George Joslyn.  The Memorial started as a concert hall with art galleries framing it (a little pun).  Sarah wanted to celebrate their mutual love of art and music, and their affection for their adopted home, Omaha.

25,000 people crowded the grounds for the opening celebration on November 29, 1931.  The exterior is constructed of Georgia Pink marble and the interior contains different marbles and stone from places all over the globe.  Artist John David Brcin, a sculptor from Chicago, created a frieze around the building.  The sculptured illustrations on the exterior depict Native American themes about life on the Great Plains.  An abstracted image of an eagle is a symbol carried throughout the museum.  The motif is everywhere inside decorating floor tiles and columns throughout the building.  Alongside the outside historical sculptural motif, are inscriptions written by American Anthropologist Hartley Burr Alexander.

John and Alan McDonald were chosen as the architects for the project.  The father and son team were close friends of the Joslyn.  John McDonald and George Joslyn’s friendship was significant enough, that John McDonald was a pallbearer at George’s funeral.  The McDonalds were the acknowledged leading architectural firm in Omaha at the time and worked with the George and Sarah on all their building projects.  They also designed numerous other buildings in Omaha, many of which still stand.  These include Benson High School, The First Unitarian Church, and the Dundee Theater building.

Interior building decoration is richly obtained through the use of innumerable kinds of marble and stone.  Everywhere you look is a different color or texture. 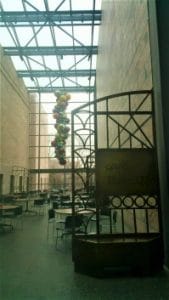 In 1994 an impressive expansion was undertaken. World-famous British architect Sir Norman Foster was engaged to create additional galleries for the museum’s special exhibits and modern and contemporary collections.  Sir Norman Foster has produced some of the most recognizable architecture in the world.  His work includes London’s 30 St. Mary Axe, also known as the “Gherkin”, a most recognizable element in that city’s skyline, and “Apple Park”, corporate headquarters of Apple Inc. at 1 Apple Park Way in Cupertino, California.

The 14,000 feet of new space has ceiling heights upwards of 27 feet, plenty of room for the blown glass and steel sculpture “Chihuly: Inside and Out” created by renowned artist Dale Chihuly.  It weighs 15,000 pounds and contains more than 2,000 pieces.  The sculpture is displayed on the east-facing side of the atrium which connects the museum with its new partner.  The glass atrium is almost the length of the museum from east to west and showcases a new handicap accessible main entrance.  It also houses the restaurant, kitchens and catering facilities.

The exterior of the Walter & Suzanne Scott Pavilion, the new additions name, is covered in the same Georgia Pink marble from the same quarry as the original museum.  A full circle of creation.

The European and American West collections are the core of Joslyn.  The Joslyn is famous for its collection of European art.  Ranging from the Middle Ages through the Impressionists, European painting is the heart of the collection.  19th-century European painting and sculpture are the principal stars.  Works by Titian, Bouguereau, Breton, Renoir, El Greco, Monet, and Rembrandt form the basis of the original group of acquisitions.  Over the years many generous donations have been made to the European collection.  This has created a well-rounded selection of works that are routinely requested for loan and inclusion in important touring exhibits.

Another renowned part of the museum’s collection is its American Western Art.  This is predominately comprised of a series of watercolor and oil paintings by American born artist Alfred Jacob Miller.  In 1837 Miller was hired by Scottish adventurer Sir William Drummond Stewart to accompany him on his travels through the western United States.  Miller recorded the trip in watercolor sketches which he then recreated in detailed oil paintings for Sir William.

At roughly the same time, Karl Bodmer, a Swiss artist, traveled with Prince Maximilian of Wied throughout the Great Plains and up the Missouri River.  Prince Maximilian was a distinguished ethnologist and naturalist.  Bodmer traveled with the explorer documenting Prince Maximillian’s discoveries and painting scenes of ordinary and extraordinary life among the Plains Indians they encountered.  Both of these artists have given us an extensive look at life in the American West before the dramatic changes of the late 19th century.

Check out my Favorite Places To Eat In Omaha