My Favorite Places To Eat In Omaha

Favorite Places To Eat In Omaha 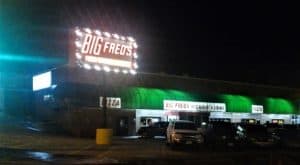 One of my favorite places to eat in Omaha is Big Fred’s Pizza. They opened in 1965 and have been popular ever since.  The first time I remember going to Big Fred’s was shortly after my family moved to Omaha in 1973.  When I went there recently it is still a lot like it was when I first saw it.  What I have always gone there for is their pizza.  The big old-fashioned sign out front is the same sign I remember from the 70’s.  The atmosphere is still pretty similar inside too except for the addition of lots of flat-screen televisions.  That probably makes it a good place to go on game days.

I have always liked their pizza so well that it is usually what I order.  It is a good New York style pizza with a thin crust.  That suits me well because I always need to watch my carbs.  If you are not in the mood for pizza there are many other menu items to choose from.  One of the customer favorites is the Prime Rib.  They have three size portions to choose from.  The menu is quite extensive it includes steaks, sandwiches, chicken, burgers, salads, and pasta.  The only thing that they have left off of the menu is dessert.  I never leave hungry and desert was the last thing on my mind.

The atmosphere is informal and a little retro.  It is a good place to go with the family or to eat and have a beer.  All of the prices are very reasonable.  This is a great place to get a good value for a good meal. 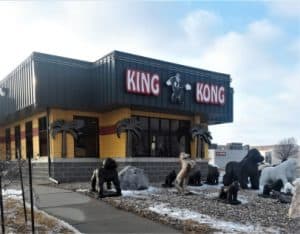 King Kong is a good place to go if you are really hungry.  They specialize in serving huge hamburgers.  The smallest burger plate is a ½ pound hamburger and a choice of fries or other sides that is enough to completely fill me up.  It is hard to imagine how one person could eat one of their two-pound burgers.  Another popular menu item is the Gyro Plate.  It is also quite good and is a very large meal.  The gyros are authentic Greek style because King Kong’s founder was Greek and he hired several people from Greece to work in his restaurant.

I almost always eat their hamburgers but the menu includes quite a few other things.  They have several varieties of Cheese Steak Sandwiches that look good.  I will have to try one of them the next time I’m there.  They have several choices of salads for more 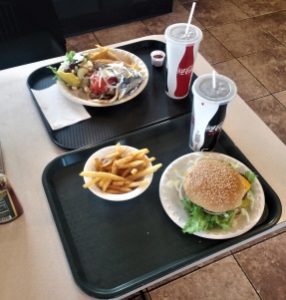 health-conscious people.  If you have kids, many of the full-sized meals might outweigh them.  Luckily, there are many things on the kid’s menu that they should like.  The kid’s menu includes smaller versions of some of the highlights from the main menu plus other favorites like hot dogs and cheese sandwiches.

King Kong also has a dessert menu.  I have never had room for dessert after eating a meal there but I might stop by some time just to try the baklava without a meal.  They also have ice cream and sundaes.

The meals are a little expensive for hamburgers but the portions make it a pretty good deal.

King Kong also has a Lincoln location at 6800 Wildcat Drive near 27th just south of I-80.

Check out My Favorite Places to Eat & Drink in Benson