My Favorite Things To Do In Historic Florence, Omaha Ne

What To Do In Historic Florence, Omaha Ne 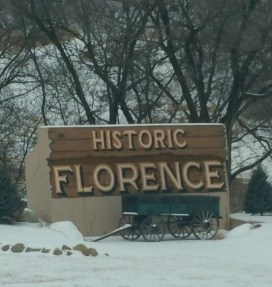 Florence, Omaha Ne is a very historic part of north Omaha that was founded by a land developer named James Comly Mitchell. The town was incorporated in either 1855 or 1857 depending on whose account you read.  Either way it is a very old and historic city that was founded while Nebraska was still a territory, before becoming a state.  James and his wife Eliza decided to name the town Florence.  Once again the historical record seems a little uncertain about exactly who Florence was.  I have read that she was the Mitchells’ daughter and I have also read that she was their granddaughter.  One thing that everyone agrees on is that Florence was named after a person from Nebraska, not Florence Italy.  Florence is full of history.  There are about 16 places I am aware of in Florence that are on the national historic register.  They include the Florence Mill built in 1846 and the Bank of Florence, now a museum, built in 1850.  Other historical landmarks include the Florence Depot built in 1887 that is now a railroad museum and the Florence Fire House built in 1888.  Florence was a stop along the Mormon trail in the mid-1800s

SOME THINGS TO DO IN FLORENCE 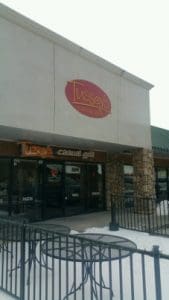 I recently ate an enjoyable meal at Tussy’s Casual Grill.  Tussey’s features mostly American food.  We went there on a Friday evening and tried two of their specials, Mahi – Mahi with cilantro lime butter was one of the more exciting things on the menu so I had to try it.  The other entrée we ordered was an Apple Brandy Pork Chop.  We also had two appetizers, Crab cakes, and Onion Rings.  Each of the meals came with a salad and a breadstick.  The bread was very soft and doughy, just the way I like them.  The salads were both made with fresh from scratch dressings.  We had Blue Cheese and Thousand Island and they were both really good.  The crab cakes were moist and had a lot of crab meat.  The onion rings were thick cut and a generous portion.  They came with spicy tomato catsup.  The Mahi – Mahi melted in your mouth.  It did not taste fishy at all.  The portion was not large but it was very good.  The pork chop meal was large and it was probably the best pork chop I have ever eaten.  All of the food was cooked perfectly. It was all fresh and tender, nothing was dry or burned. They also have a bar and drink specials but I did not drink anything when I was there.

Most of the evening entrees were $17.99.  The daily specials were normal menu items that were a little lower priced at $14.99 each. The specials are probably a good way to get the freshest possible food at a good price.  Tussey’s is also open for lunch and the lunchtime prices are lower.  Not a lot of atmosphere, but it was a good meal and I will go there again. 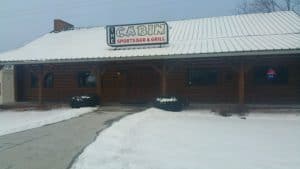 It is an interesting building with a casual atmosphere that is actually constructed out of logs.  I have read mixed reviews for it online and that really surprises me.  I have eaten there several times and it has always been a good experience.  I even took my mother there for dinner.  They have great steaks and prime rib.  It has always seemed like a friendly place to me.  Whether I wanted a good steak or just wings and beer, they have always served me good food at a good price.  The last time I went there, we ordered a pitcher of beer and I was surprised by the size of it.  For $8 we got a pitcher of domestic beer that held a full 6 glasses.  That is cheap beer.  They have a pool, darts, and large projection screen TVs.  They also have Karaoke and Keno.  It is a great place to relax and watch a game.  Every time that I have been there it was busy.  It is definitely a local favorite.  I liked this place enough to go there several times and I would recommend it to anyone who wants to eat in Florence. 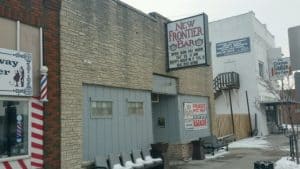 I recently spent an evening in North Omaha and was in the mood to check out a bar in the heart of old Florence when I noticed the Frontier.  It is a sort of hole-in-the-wall local bar but it has some good points.  I think the best thing that they have going for them is that they frequently have live bands on the weekends.  They also have a pretty good sound system.  The Bose speakers were high quality.  Although I was there at a slow time of day in the early evening, I saw that they have two large projection TVs that would be good for watching games.  I also noticed that they have Keno although that is not something I play.  It was located in a very old building that had an interesting tin ceiling.  The bar has the regular activities such as pool, darts, and keno.  They even have a dance floor.  The main thing I would recommend is to have a few more lights on the first floor.  Low light might be about right when the band is playing but it felt a little like a dark cave when I was there earlier in the evening.  The Budweiser clock above the bar was great.  It had a model of the wagon being pulled by a whole team of Clydesdales, classic.