My favorite of the downtown Omaha Attractions is a museum that is dedicated to the history of Nebraska and Omaha.   It is located in the historic Union Pacific passenger terminal that was built in 1931 and operated until 1971.  Apparently, it was an important stop for servicemen traveling during World War II.  The building is a great example of Art Deco architecture.  It is a lot like the state capitol building that was built near the same time.  In my opinion, the 1930’s were a golden age for architecture.  It was a great time for car styling too.  The tall ceilings and large chandeliers of upper-level main hall gave Union Station a very grand feeling.  The upper level of the building is furnished with benches and sculptures that are intended to recreate how it would have looked in the 1940s.  You can also buy a soda at the old-fashioned soda fountain.

The lower level of the building houses the museum exhibits.  Some of them are permanent exhibits and about half of the space is dedicated to rotating exhibits that change about every six months.  That way there are always new things to see.  They have a steam locomotive and a passenger train that you can tour.  The passenger train sits in the same place that I saw the “Freedom Train” displayed in 1976.  My father took my brother and me to that exhibition commemorating the bicentennial.  The passenger train was in service in the 1960’s and it looked just like a train that my family took across the country for a vacation in about 1965.  It is a real blast from the past. 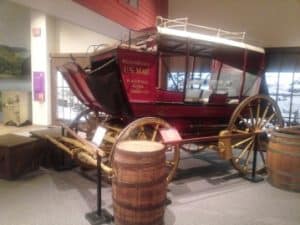 I am an antique car enthusiast so I really like some of the classic cars and trucks that they have on display.  Some of the other permanent displays include an exhibit about the Indians that lived on the plains.  I really liked the stuffed buffalo.  They had a pretty neat Conestoga wagon and a stagecoach too.  Another unique permanent exhibit is the Byron Reed collection.  It is mostly a collection of early American coins and paper money.  Coin collecting was an interest of mine when I was a kid.  They have an impressive collection.The most popular exhibit currently on

display is “Fighting for the Right to Fight”.  It will be there until July 15, 2018.  It commemorates African American soldiers who fought against segregation at the same time that they were trying to fight for their country.

One of the other things that I really liked was all of the pictures of downtown Omaha from one hundred or more years ago.  It was fun to look for things that are recognizable today.

The museum is open six days each week from Tuesday through Sunday, they are closed on Mondays.  The cost of admission for adults is $11 and children are $8.  If you are over 62 years old it only costs $8.  It is a great place to take the family for an afternoon of interesting history.

Another top Omaha attraction is the Upstream Brewery. It is located in a building that has a long tradition of entertainment and dining in Omaha.  In the Seventies and Eighties, it was the Firehouse Dinner Theatre.  The building started out as a firehouse that was built in 1884.  It continued operating as a firehouse until 1944.  The Upstream Brewery opened in 1996. Until recently I always ordered a steak whenever I ate there and was not really even aware of all of the other food choices.  In addition to having good 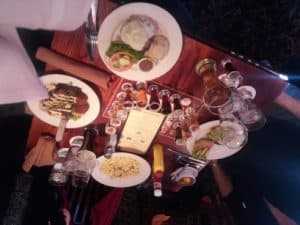 steaks, there are less expensive (but still tasty) choices on the menu such as burgers, pizza, and appetizers.  They even have some of the best macaroni and cheese I have ever eaten.  Great cheese!  Last time I was there I tried the fried calamari as an appetizer and it was cooked just right – not fishy or rubbery.

I always enjoy eating and drinking at the Upstream Brewery.  An old friend of mine who visits Omaha once or twice each year has made the Upstream a mandatory stop during each of his visits for several years now.  It is a good place to have a great Omaha Steak and to enjoy some of the best beer in town.  The service is cheerful, attentive and quick.

There at least a dozen beers that they brew and all of them are good.  I usually have a Flagship IPA but I have also tried most of the rest of the beers on the menu.  They sell samplers so you can try all their fine beers and pick your favorite.   If you want to bring home some great beer they sell growlers at reasonable prices.

About 5 years ago a successful brewpub chain called Rock Bottom tried to compete in Omaha’s Old Market.  The Rock Bottom had good food and beer but it never caught on.  They couldn’t compete with the Upstream Brewery.