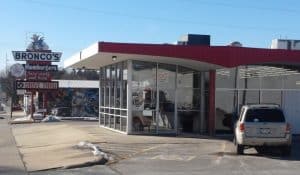 Broncos is my favorite Omaha original hamburger restaurant. The company was started by “Bronco Billy” Barnes who opened his first restaurant in 1959 at 30th and Fort.  They claim to have been the first fast-food restaurant in Omaha.  That restaurant is now closed and the location that was close to 72nd and Pacific is now a Runza Hut.  There are still two locations operating and they serve some of my favorite hamburgers on the planet.  The downtown location is located at 45th and Leavenworth and the west location is close to 120th and Pacific. 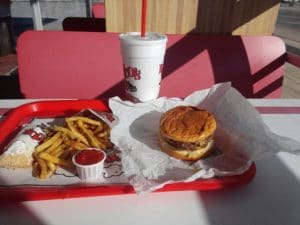 My favorite menu item is the big Bronco combo.  Their burgers are made with fresh hamburger that has never been frozen and they have just the right amount of fried grease to give them a great taste.  Probably the very best part of their meals is their French Fries, which are cut from fresh potatoes.  They are easily the best fries I have ever eaten and they are served in very generous portions.

The menu includes nine types of hamburgers as well as Pork Tenderloin sandwiches that are huge and very good.  They also have chicken and fish sandwiches as well as hot dogs.  Lately, I have been more concerned with carbs so I usually eat the chicken rather than sandwiches with a lot of bread.

Broncos is open for Breakfast, Lunch, and dinner and they even have a kids menu.  If you want to take the family out for some good food at a reasonable price you should try Broncos. 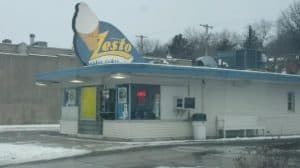 There are several locations to choose from in Omaha, Lincoln, and Fremont.  Most of the country is dominated by Dairy Queen and of course, they have great ice cream, but in eastern Nebraska, Dairy Queen has some competition from a local favorite, Zesto.

Zesto is best known for its’ soft-serve ice cream.  My favorite menu item is a cone dipped in chocolate or cherry and served on a waffle cone.  They have vanilla and chocolate ice cream, regular and sugar and waffle cones, sundaes, banana splits, Malts and shakes.  I know that malts are supposed to be different because they are flavored with malt powder but they always seemed like the same thing as shakes to me.  And don’t forget floats.  All great stuff.

I know of several Zesto locations in Lincoln, Omaha, and Fremont.  They all have the same ice cream and the same blue and white signs and buildings but they are different from each other.  I think they all used to be seasonal businesses that opened in the spring and closed in the fall.  Now many of the locations are open all year round.  You can get lunch or dinner any time of year.  So if you get the urge to buy ice cream in January they can help.  The menu is a lot more extensive than it used to be.  For instance, the year-round location on north 30th Street in the Florence neighborhood in Omaha serves 7 varieties of burgers, sandwiches, 3 types of hotdogs and shrimp.  They even have several choices of appetizers.  Some of my favorites are fried cauliflower, fried mushrooms, and the tenderloin sandwich.

All of their meals are very economical.  The meals all include fries and a drink and they range from about $5 to $8.  If you want some good American food or some very good ice cream this is a place you should check out.

Harold’s Koffee House is a fixture of the Florence community. It is a true Omaha landmark.  Established by Harold and Pauline Halstead in 1958, the restaurant has a vintage atmosphere.  They only serve breakfast and lunch, no dinner.

Check out my favorite museums in Omaha Nebraska